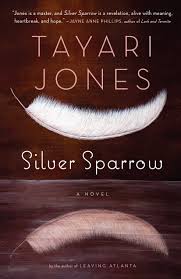 SILVER SPARROW, by Tayari Jones, is a complex, superbly written novel with no easy answers. Jones has created flawed, believable characters who struggle with difficult moral issues of family and loyalty even as the consequences of their choices unravel with painful inevitability. The voice is mesmerizing—deceptively simple, richly nuanced, and true to itself.

Dana Yarbor and Chaurisse Witherspoon have different mothers and the same father. Their father is married to both of their mothers. Dana knows this, but Chaurisse does not. Her father, James Witherspoon, is terrified that Chaurisse and her mother, Laverne, will find out about Dana and her mother, Gwendolyn. Only someone with Jones’ mastery and sensitivity could tell this story in ways that enlarge rather than narrow our understanding of what it is to be human.

The first half of the novel is told from Dana’s perspective. When her friend, Ronalda, asks if Dana is illegitimate, Dana replies:

Every life decision Dana makes is informed by her sister’s choices—where Dana can go to school, which programs she can enroll in, which summer job she’s allowed to take. When Gwen wants to enroll Dana in the Saturday Science Academy, where Chaurisse plans to attend, James becomes evasive.

I gave my mother a sharp look. ‘Love’ meant I wasn’t going to be able to go.”

James, with his stutter and “glasses thick as a slice of Wonder Bread,” is not a womanizer, nor is he altogether unlikeable. He married Laverne when she was fourteen and he wasn’t much older himself, after Laverne became pregnant the first clumsy time they had sex. James’ mother, Bunny, worked as a live-in for a white family, taking care of their children while James and his friend, Raleigh, who are like brothers, were left to fend for themselves. Bunny took Raleigh in when his own mother abandoned him because he was half white and she couldn’t stand the sight of him. Laverne, also, was lost, a child bride taken in by Bunny.

When Laverne lost her first child, James did not leave her, which he easily could have. It’s a testament to Jones’ skill and compassion for all her characters that she doesn’t give the reader easy ways out. James is not a villain, even as his choices, and Gwen’s, become increasingly uncomfortable. “I love you, baby,” starts to sound like nails on a chalkboard.

Gwen, too, has struggled with a complicated past. In one of Jones’ interesting stylistic choices, it’s Dana who tells the story of her mother and father’s meeting.

“It was love, mind you, but not the lightning-bolt kind. She had that sort of love in her first marriage, which had lasted only nineteen months. What she had with my father was a sort of creeping love, the kind that sinks in before you know it and makes a family of you. She says that love like what she has with my father occurs on the God level, not of the world and not bound by the laws of the state of Georgia.

It’s the kind of love that leads Gwen to bring Dana “surveilling” to spy on Chaurisse and her mother, and it means that Dana is raised forever in the shadow of her sister. Dana sees her father one dinner a week, and her mother’s precarious position infiltrates their lives. “With wives it only matters who gets there first…Wives can afford to let themselves go. Concubines must be vigilant.” Love, for Dana, is associated with words like concubine, mistress, whore.

Just as James, in his own way, tries to do right by his children, Gwen works hard to support her daughter, valuing education and advocating for Dana. But it’s with a sinking recognition that we read how Dana’s boyfriend, Marcus, won’t acknowledge her in public, even as he “rubbed my arm and spoke so gently that everything he said sounded like love.”

Things become more complicated as Dana grows up and questions the limits that have been imposed upon her. She keeps circling towards her sister until one day Chaurisse turns around in the drugstore to find herself face-to-face with Dana, a “silver girl,” who Chaurisse does not know.

“‘Silver’ is what I called girls who were natural beauties but who also smoothed on a layer of pretty from a jar. It wasn’t just how they looked, it was how they were.”

Chaurisse is not a silver girl, and has “never had much luck with the silver population.”

As the girls’ worlds spiral closer, the novel shifts to Chaurisse’s point-of-view. Dana is not the only one who has surveilled Chaurisse and Laverne’s life from afar, so it’s thrilling to see Laverne in her element in the Pink Fox, the beauty salon she runs from her home. And it’s with a certain voyeuristic pleasure that we learn that Laverne, in her embellished track suits, “collected hairpieces, wigs, and falls like other women collected Lladró, Swarovsky, or souvenir thimbles.” We, too, are eager to learn more about this other family.

Laverne, unlike the beautiful Gwen, is not one of the silver people. But Laverne is hard-working and decent, an entrepreneur with a sharp wit who has never had the privilege of indulgence of any kind. Years ago, when she found herself installed in the home of her new husband, whom she barely knew, Laverne asked James and Raleigh if they were going to keep going to school.

“They looked at each other, confused-seeming. ‘Yeah.’

The word seemed to stick in his mouth. Mama had braced herself for it, but it was taking too long to be born.

‘Pregnant,’ she said, finishing his sentence before spinning herself around and walking toward the kitchen.”

As Dana infiltrates Chaurisse’s world, their lives oscillate closer with a horrifying sense of anticipation. Pain is unavoidable, but there’s satisfaction in moving from lies, “…as easy as falling down a flight of stairs,” to truth. Even if the consequences are devastating.

“When you have seen your mother shattered, there’s no putting her back together. There will always be seams, chipped edges, and clumps of dried glue. Even if you could get her to where she looks the same, she will never be stronger than a cracked plate.”

In a story—maybe every story—where the children carry the weight of their parents’ burdens, it’s Chaurisse who responds when Laverne says she wants their life back the way it was.

Tags: Book Review, SILVER SPARROW, Tayari Jones
From: Uncategorized
← How to Set Yourself on Fire by Julia Dixon Evans
ON EARTH WE’RE BRIEFLY GORGEOUS by Ocean Vuong →
No comments yet